All About the UDP

We are the largest political party in The Gambia, founded on the 23rd August 1996.

The UDP won 31 out of 53 contested seats at the National Assembly in the last parliamentary elections of 2017. We also control all but one of the eight local government councils in The Gambia.

We represent all segments of the Gambian society and operate an open door policy on membership.

The UDP has chapters across the globe including in the United Kingdom, Mainland Europe, the Middle East, Angola, and the United States of America. 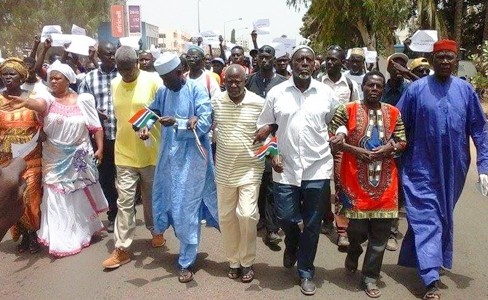 Zero tolerance on corruption and all forms of organised crime.

Respect for fundamental human rights and freedoms, the rule of law and constitutionalism.

The participation of women in the political governance of the country.

Protecting the environment and mitigating the impact of climate change.

The education of the girl child.

The Gambia lies on the west coast of Africa, occupying a land area of 11,295 sq. km. It has a population of about 2 million people, making it the smallest country in mainland Africa. The capital city of The Gambia is Banjul.

Following the military coup that toppled the first republic in1994, the national parliament of The Gambia was dissolved and replaced with a military ruling council called the Armed Forces Provisional Ruling Council (AFPRC). The constitution was also suspended and a ban on political parties and political activities imposed.

In October 1994, the AFPRC announced a programme for transition to democratic constitutional rule, which provided for the restitution of the elective organs of the state in four years. Both the local civic organisations and the international community expressed concern that the transition period as too long. The AFPRC responded by establishing the National Consultative Committee (NCC), which was tasked to review the issue. The transition was later reduced to two years but the ban on political parties and political activities remained in place.

Shortly before the 1996 presidential election, the military junta decided to lift the ban on political activities. However, the three main political parties in the country at the time, the People’s Progressive Party (PPP) of the ousted president Jawara, the National Convention Party (NCP), and the Gambia People’s Party (GPP), remained banned and were excluded from participation in the subsequent national elections, as were all holders of executive office in the 30 years preceding the military takeover. Meanwhile, the AFPRC, which would later morph itself into a political party, had been fully utilising its own July 22 Movement to enable the junta Chairman to contest the forthcoming presidential election from an advantaged position of incumbency. The Movement manifested all the features of a party from the very onset and continued to exhibit the same throughout the transition.

The restriction of political freedoms imposed by the AFPRC through its various decrees, particularly Decree No. 89, undermined political pluralism in the country and thereby creating a vacuum. This untenable situation instilled an urge in some concerned Gambians who came together to find a common solution. The discussions that ensured led to the birth of the United Democratic Party (UDP), barely two weeks before the presidential election of 1996. The party came second with 36% of the total votes. The UDP remained the second largest party in The Gambia until 2016, when ex-president Yahya A.J.J Jammeh was voted out of power, despite the best efforts of the AFPRC/APRC regime to coward and intimidate our officials and supporters.

Our party’s manifesto is also designed to prepare our very youthful population for a future that is full of opportunities and a nation that is free, democratic and at peace with itself. Learn about our very clear vision for positively transforming The Gambia and Gambians. We hope to earn or win your support for the United Democratic Party.

Lawyer Ousainu ANM Darboe is running to defeat President Adama Barrow, to liberate our dear motherland from massive corruption, ineptitude, high commodity prices, high crime rates and no clear vision. He has the experience, the wisdom, the strength of character, patriotism and commitment to effect the change that the Gambia deserves and it is yearning. We, the United Democratic Party need your help, any amount you can contribute to intensify our efforts and fund our campaign to give the Gambia the leader it deserves who can kickstart its development agenda and lead with a purpose.